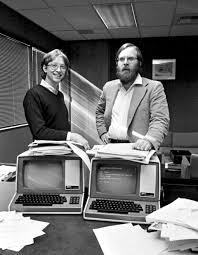 Bill Gates is incredibly rich. There is a reason for it and to be fair he has worked for it. He is the co-creator of Microsoft. In the late 1970’s Whilst others were pondering complicated operating systems like the Apple Mac or rather than expand upon their reliable and affordable home computer (and the fact that in the early eighties more people in the UK owned a home computer than any other country) an electric transport system called the C5, Gates was working on Windows and MS Dos.

It was a work of genius. When coupled with a great relationship with Intel and their advanced core processors the road to success was extremely well paved. MS-Dos was clunky to be sure but crucially it was easy to understand and navigate without having to read a brick thick manual to use it. Windows followed the same pattern. It’s easy when you have to click on an icon.

Microsoft also gave us the workable Office package, something that transcended both the business world and the personal in terms of what it could do for people. Word was just as useful when it came to writing a letter to Grandma as it was to send out a marketing letter on a B2B basis.  Excel was good for home accounting and creating a budget for a small business as well. You can even put a PDF to Excel on it.