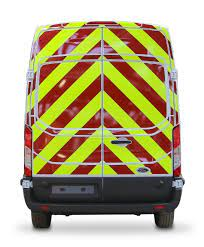 Chevrons (pronounced chee vrhon) is an upside-down V-shaped marking, most often flat, but sometimes angled. The term is commonly used in reference to some type of insignia or badge used by the military or law enforcement in either camouflage or police or military uniforms, or as a border or badge on flags or banners.

Chevrons are also used in reflective wrapping on emergency response vehicles. The colours help with increased visibility and the shape is contrasting and instantly recognisable. For Chapter 8 Chevrons, visit Vehicle Chevrons

Chevrons in the military are actually a type of eminence worn by officers of the armed forces; while they were originally created to indicate rank and precedence in the British Army, it was used later on by the US Military. They are also used to denote the wearer’s nationality (in the case of the military), and for recognition of medals awarded for valour. Today, chevrons are often used to display a unit’s name, such as marines on a tank or vehicle, indicating the headquarters of that particular military branch.

There are a variety of designs available when it comes to the use of chevrons. The most popular type of chevrons is perhaps the flat chevrons that are quite simple, appearing as if they are extending outward from the arm, and appear to be V-shaped or triangular in shape. Other chevrons however include the shoulder chevrons that are slightly curled or slanted at the ends, resembling a sword or dagger.