What did a blacksmith do?

You do not find that many Blacksmiths around any more. It is a great skill and dying trade that does not have the same call for that it once did. The Blacksmith was one of the most important craftsmen in the town and village and his skills were highly sought after. They were the person that could shoe horses, fix and make farm implements and they made the nails for the carts and for the barns and buildings. They did it all by hand, eye and skill in the forge with their anvil. They were basically the equivalent of a modern day Euromac Bending Machines like the ones from Cotswold Machinery Sales. 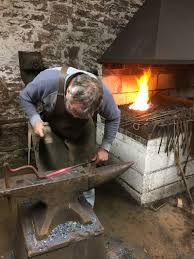 The forge was not just a place of work and activity. It was usually the warmest place as well with the fires of the forge on the constant go. Whilst this was great in the winter it was not so pleasant for the Blacksmith in the summertime. It was also the place where the news was to be found from interesting people who happened to be passing through and needed something fixing.

The other thing about the Blacksmith was that he was immune from the class based society that Britain maintained from Feudal times onwards. The skill of the Blacksmith outweighed the petty niceties of social convention. Everyone, be they rich, in the middle of society or the poor needed the attention of the Blacksmith at some point. It was a good idea not to annoy these skilled craftsmen.